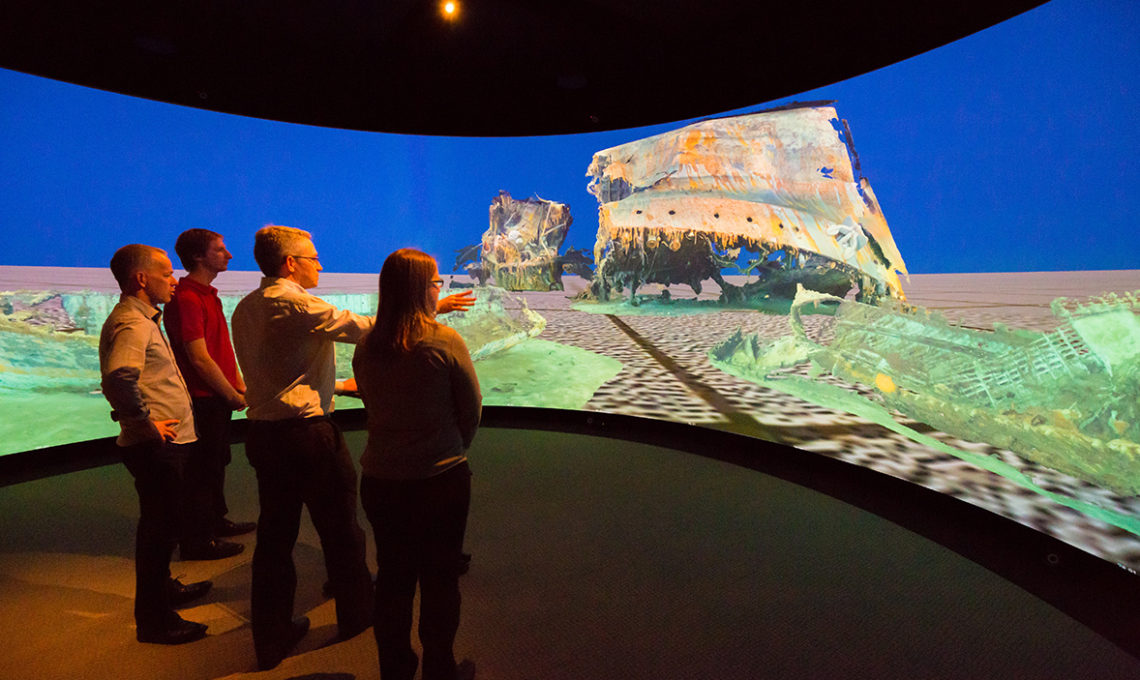 Visualising the story of Australia’s largest ever naval loss

The Sydney-Kormoran Project, a Curtin University and Western Australian Museum collaboration, is using the latest imaging technology, research networking, supercomputing and advanced visualisation techniques to tell the story of two of Australia’s most significant shipwrecks – the HMAS Sydney (II) and the German raider HSK Kormoran.

The shipwrecks met their fate at the bottom of the Indian Ocean on 19 November 1941 after a short but fierce battle ending with the loss of all 645 crew of the Australian vessel. How and why Sydney, a state-of-the-art warship, was defeated by Kormoran, a modified merchant vessel, has long been the subject of much speculation and controversy.

Despite the historical significance of these vessels – whose resting place 200km off the coast of Western Australia was only discovered in 2008 – they have been largely inaccessible to the public due to their isolated location 2,500 meters below the ocean’s surface.

Now, thanks to detailed 3D imaging surveys carried out by Dr Andrew Woods, Senior Research Fellow at Curtin University, and his team, haunting images have emerged that reveal new insights about the last moments of the ships, including a previously-undocumented 15-centimetre shell hole through Sydney’s bridge.

“The Sydney-Kormoran Project is the first research project in Australia to have undertaken such an ambitious underwater survey and has set a new bar for this type of work,” said Woods.

The expedition to the ocean floor involved four years of preparation, 63 crew members and two remotely operated vehicles fitted with 14 digital cameras. Four dedicated 1Gbps links to 2,500 meters were used to transfer images from the cameras to the researchers on board the project’s service ship for quality assurance in realtime.

Over 500,000 images and 300 hours of high definition video footage were collected and recorded on hard drives. After preprocessing at Curtin University, the data was seamlessly transferred over the AARNet high capacity network to the Pawsey Supercomputing Centre for processing.

“We can’t do our research without AARNet,” said Woods. “We’ve got to move data around and we rely on the AARNet network to do that for us.”

The project team is using Pawsey’s Magnus supercomputer to generate detailed digital 3D models that will become the basis for a new museum exhibition, giving visitors an interactive and immersive experience of the shipwreck sites and this important piece of Australian history.

Researchers are using Curtin’s HIVE (Hub for Immersive Visualisation and eResearch) facility to test the 3D models and experiment with virtual reality scenarios.

“The plan is to provide underwater virtual heritage experiences at museum sites that will allow people to explore and understand the stories of these two wrecks as if they were down at the wreck sites. It’s a powerful way to tell a story and a great way of sharing cultural heritage,” Woods said.

The AARNet network and services are purpose built to meet the unique data movement needs of Australian researchers.

This case study was first published on the AARNet website

Join the conversation
Related articles
Arts & Culture
Opening the door to Europe’s digital language library
Arts & Culture
Preserving the Radziwills heritage in Belarus
Arts & Culture
Supporting remote teaching of performing arts
Arts & Culture
Powering a circuit of university movie theatres
Arts & Culture
Boosting the vitality of the Belarusian language
This website uses cookies to improve your experience navigating our site. By continuing to browse, you are agreeing to our use of cookies. To learn more about how we use cookies, please view our Privacy policy.
OK, I Understand