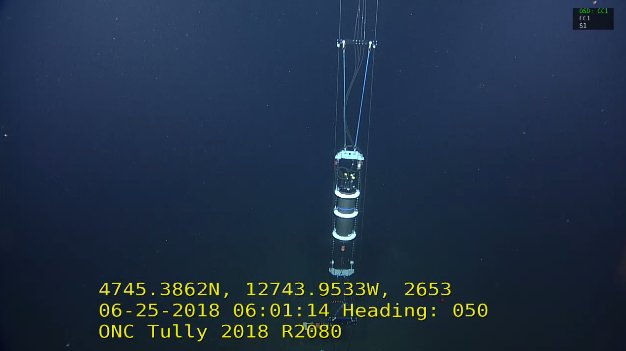 Seeking powerful neutrinos off the coast of British Columbia

“They’re messengers of the most interesting things that happen in the Universe.”

This is how Dr. Carsten B. Krauss, Director of the Centre for Particle Physics at the University of Alberta, describes high-energy neutrinos.

“Neutrinos come from the explosions of stars, and possibly from other sources, like the environment around black holes,” says Krauss. “What’s great about them is that they move in a straight line, and can’t be reflected or interacted with along their journey. So you can be certain of where they came from, and what they represent.”

This is why so many scientists around the world are engaged in the search for neutrinos. Unfortunately, because neutrinos don’t interact with anything, it can be very difficult to detect them, particularly high-energy neutrinos.

Krauss is part of a global team of scientists that has been testing a sea-based “neutrino detector” environment off the coast of Vancouver Island. Utilizing the Ocean Networks Canada underwater laboratory, the group has run two lines of sensors from the ocean floor, measuring the transparency of the deep ocean water. Their ultimate goal is to search for light caused by the collision of neutrinos with other particles in the water. (Water — or ice — makes a particularly good medium for these detectors, as it is easier to track the motion of neutrinos in water if and when they happen to collide with another particle.)

They are now looking to scale up this detection system, and have submitted a funding request to the Canada Foundation for Innovation.

The importance of collaborations

“Particle physics is a super collaborative environment. It’s difficult for a single group or country to make an impact, so we have to work together,” says Krauss.

Because observations of high-energy neutrinos are so infrequent, it takes a very large detector to spot them. The biggest in the world is located in Antarctica, called ‘Ice Cube’. It involves strings of sensors encased in a cubic kilometre of ice. Even at this large scale, Ice Cube is only able to spot a few high-energy neutrinos each year. Several Canadian researchers are involved in this project, with Compute Canada providing a significant fraction of the computing resources used to analyze the data coming out of the South Pole.

Krauss says a large Northern Hemisphere detector is now needed. Similar projects have been started in the Mediterranean, as well as in Lake Baikal in Russia (the country’s deepest lake), but none have been successfully completed yet.

“We can’t have too many detectors,” says Krauss. “The key is to develop reliable, affordable equipment that will allow us to scale this whole thing up, link together, and view the whole neutrino sky.”

Building a detector in Canada makes sense, as we already have the Ocean Networks Canada infrastructure in place to support research like this. “They have a large network of underwater observatories linked by cables that collect real-time data to study all kinds of cool things related to physics, biology, chemistry, and geology. We realized we could just piggyback on that, and link our particle detector to their network.”

Ocean Networks Canada also connects to the National Research and Education Network, which is how the lead researcher for this project can be located nearly 1,000 km from the ocean platform (via Cybera in Alberta and BCNET in BC).

The proposed Canadian neutron detector is called P-ONE (Pacific Ocean Neutrino Explorer), and will feature 100 optical modules connected together. This would make it the largest particle detector in North America.

For Krauss, detecting a high-energy neutrino is a surreal experience. “Neutrinos are so interesting to particle physicists because they are so ghost-like. But, more importantly, they allow us to look inside the places we would never be able to go, like inside a star.”

He adds: “What we’re looking for is the super-high energy neutrinos that come out of exploding stars, which we’ve never even seen. There’s something out there that’s making a crazy amount of energy, and we don’t understand it. How many black holes are there at the centre of galaxies? How often do these occur? We can learn more about this by studying neutrinos. We can learn more about our own galaxy by looking at other galaxies!”

The group will publish the results of their pilot project later this year, and will find out later this year if they will receive CFI funding. Their goal is to start deploying the large detector in 2023.

For more information on the project, visit: http://www.pacific-neutrino.org/.