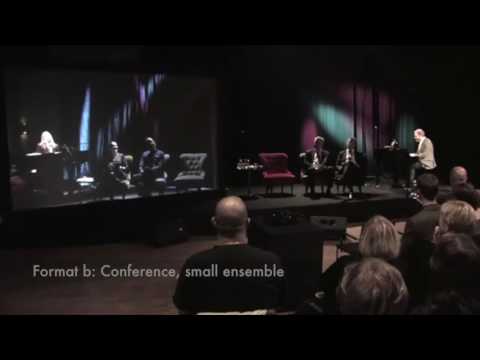 In 2015 a group of artists, entrepreneurs, researchers, and cultural and educational institutions joined forces to build a Nordic infrastructure for distributed presence. Since then they have played theatre, and sung opera together, while being hundreds of kilometres apart – and teaching music as well.

A man living on the remote Åland archipelago at the entrance of the Bothnian Sea is one of the driving forces behind this new infrastructure, the Nordic Centre for Digital Presence, NCPD.

“We started with developing digital solutions for performing arts, and from there we went to music education,” says Mårten Fröjdö, one of only 29.000 people living on Åland.

The archipelago consists of more than 6.500 islands, with several hours of ferry ride to mainland Sweden and Finland. Thus, on top of relying heavily on boats and ferries to bring people together, the small, independent island community depends on broadband connections to compensate for the hassle and cost of transport.

“Here on Åland, as soon as local music students become too good for the few music teachers we have, we bring in teachers from e.g. the Stockholm Symphony Orchestra,” said Fröjdö.

“But all the travelling involved makes that solution rather expensive. Instead we convinced our local government to invest in technology for remote music teaching. Now we have a studio in Mariehamn, the main city of Åland, and another studio only a short walk from the Stockholm concert hall. The two studios are connected through a powerful fibre and together with special equipment we can secure the low latency that is crucial for people to play music together. If you just want to stream something you don’t need this equipment. But for interaction, e.g. playing music together, you need low latency, and it has to be less than 20-25 milliseconds.”

After starting with music education on Åland,  the concept has been developed further, connecting other music schools, theatres, and universities. Now there are 130+ members of the NCDP network, including some national broadcasting companies.

To hook up to the network and get the advantages of the remote low latency format, music schools, theatres and others have to invest in equipment, including microphones, monitors, speakers, SDI cameras etc., and not least a Nimbra box. The Nimbra is a media gateway that converts sound and images into optical signals, and it is designed to handle demanding real-time video services. Together with the equipment  a good fibre connection is needed, preferably around 10 Gb.

Hardware up and running

A number of organizations in Sweden, Finland and Norway have NCDP hardware up and running, and others are preparing to join the network, working to find funding for it.

“In all of this we depend heavily on the research & education networks in the region. They are very helpful, because they can offer us powerful connectivity in the big cities, close to the backbone of the network. The Nordic R&E networks offer 100 Gbit/s connections, which is more than enough for us. So far we haven’t needed more than 1.5-8 Gbit/s.”

“When it comes to last mile fibre we either use the networks owned by the cities we collaborate with, or we try to negotiate discounts with private connectivity providers. Money is important – the music schools have to be able to afford it.”

The NCDP network is slowly spreading, and apart from adapting the remote music teaching concept to other parts of the Nordics, the network is preparing a number of new projects. One of them is the Swedish Riksteatern performing the opera Don Giovanni with a remote live orchestra, allowing the ensemble to visit small stages far away from the big cities. Another is the fibre optic theatre project “Three Rooms” tying three Nordic cities along latitude 62 together with high-speed connections. The cities are Trondheim, Norway, Vaasa, Finland, and Umeå, Sweden.

Moreover, recently the NCDP network got its first non-Nordic member. Coventry University has acquired NCDP spec-approved hardware and is planning to use it, among other things for projects connected to Coventry becoming EU Culture Capital in 2021.

That same year the Åland islands will celebrate their 100 years of independence. And Mårten Fröjdö promises, that he and his fellow NCDP networkers will come up with something spectacular in the field of distributed presence for that grand occasion.