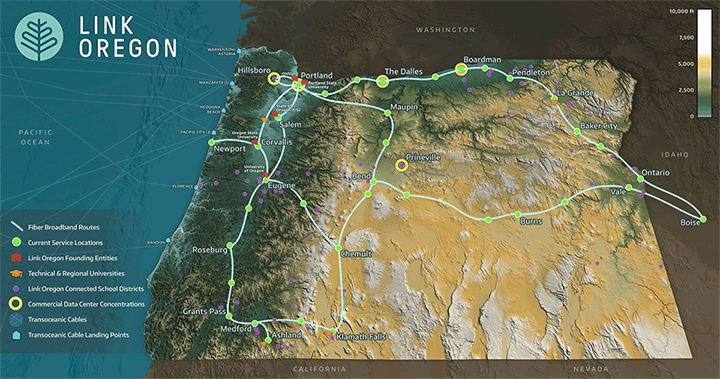 With an unprecedented level of broadband infrastructure funding set for distribution to states from the federal government, it is paramount that underserved communities have a voice in funding decisions and strategies for planning and implementing successful, future-proof broadband solutions. The nine federally recognized tribes in Oregon historically have been among the most underserved communities in the state with respect to internet infrastructure and connectivity.

As part of its dedicated effort to support broadband access for all Oregonians, Oregon’s research and education network, Link Oregon, is partnering with Oregon tribes – along with the Network Startup Resource Center (NSRC), the University of Oregon (UO), Oregon State University (OSU), and others – on a series of discussion and planning sessions called the Oregon Tribal Broadband Summits (OTBS). To date, three summits have been held in December 2021 and March and April 2022.

With territory across Oregon’s diverse geography – including mountains, desert, river basins, and coastline – many Oregon tribal communities are outside the service areas of traditional telecommunications providers. During the COVID-19 pandemic, the need for access to critical services such as remote education, telehealth, online public services, and work-from-home opportunities became more essential than ever. The inequity in broadband access and affordability was a significant motivation for the enormous allocation of federal dollars to close infrastructure gaps.

From its inception in 2019, Link Oregon has been focused on reaching rural and tribal communities in Oregon. The emergence of the various federal broadband infrastructure funding programs inspired Link Oregon’s executive director Steve Corbató to reach out to his tribal contacts and gauge interest in convening a forum to explore tribes’ infrastructure and deployment challenges and collaborate to fully leverage those funding opportunities. The idea was met with enthusiasm and a steering committee was formed with representatives from five Oregon tribes – the Confederated Tribes of Siletz Indians, Confederated Tribes of Umatilla Indian Reservation, Coquille Tribe, Klamath Tribes, Burns-Paiute Tribe – along with the Affiliated Tribes of Northwest Indians Economic Development Corporation (ATNI EDC), Link Oregon, NSRC, UO, and OSU.

The first Oregon Tribal Broadband Summit, held in December 2021, brought together representatives of the five tribes and organizations involved in the steering committee, along with the Confederated Tribes of Warm Springs, the Cow Creek Band of Umpqua Tribe of Indians, and the Confederated Tribes of Grand Ronde and with support from the Nez Perce Tribe, whose traditional territory was along the lower Snake, Salmon, and Clearwater rivers in what is now northeastern Oregon, southeastern Washington, and central Idaho. Jason Younker, chief of the Coquille Tribe, opened the Summit with a prayer and land acknowledgement. Participants also included representatives from state and local government, utilities, transportation, the non-profit sector, and more. Discussion centered around the unique needs of the Tribes together and individually, explored potential strategies to address those needs, and highlighted the efforts and successes already undertaken to improve access on Tribal lands.

The program incorporated a wide array of external speakers and contributors as well, including Vint Cerf, vice president and chief internet evangelist for Google and long-time tribal connectivity advocate; Oregon Representative Pam Marsh, who has been a strong, consistent legislative supporter of broadband for Oregon; Mark Thompson, commissioner for the Public Utility Commission of Oregon; NSRC’s Steve Huter and Hans Kuhn; and many others. The program focused on listening, building connections between tribal and state broadband efforts, identifying current gaps in or roadblocks to proposal development, and gathering resources to address those gaps.

“Two main lessons that I took away from these conversations are, first, that every Tribe is different and, second, as Matt Rantanen often says, most Tribes have a deficit of trusted partners. So, the principal purpose of these summits is to build awareness and connection between the Tribes and entities in education and state and federal government with which they can develop trust-based, long-term working relationships,” noted Steve Corbató.

The second OTBS event (OTBS II), held in March 2022, took the conversation further, with a presentation from Adam Geisler of the National Telecommunications and Information Administration (NTIA) on the status of that agency’s broadband programs, a discussion with the Oregon Broadband Office on the evolving state program planning, and a progress report on the recent NTIA planning grant awarded to the Confederated Tribes of Siletz Indians. In addition to the eight tribes represented at the first Summit, OTBS II also welcomed representatives from the Confederated Tribes of the Coos, Lower Umpqua, and Siuslaw Indians, encompassing all nine federally recognized tribes in Oregon.

The event also featured a live-feed report from the Tribal Broadband Bootcamp in Temecula, California. The bootcamps are orchestrated by Matt Rantanen, Christopher Mitchell, and a coalition of partners committed to expanding networks in Indian Country. One high point of the report was an enthusiastic endorsement of the bootcamp experience by a new participant, Gage Sand, a member of the Bear River Band of the Rohnerville Rancheria in northern California. Sand detailed the tremendous value of the technical skills he has gained through the bootcamps and their influence on his career options and for his Rancheria. An Oregon-focused Tribal Broadband Bootcamp has been scheduled for early August at the University of Oregon in Eugene.

The most recent Summit, held in April (see the OTBS III agenda), also included representatives from all nine Oregon tribes and featured a listening session hosted by the Oregon Broadband Office (OBO). The session enabled the OBO to gather input from the tribes for its rule-making process to be applied to the funds allocated to Oregon through the various federal broadband programs administered by the U.S. Treasury Department and NTIA. Lindsey Watchman, chairman of the General Council of the Confederated Tribes of the Umatilla Indian Reservation, opened the Summit with a prayer and land acknowledgment.

This story was first published on the Internet2 website. Read the original story