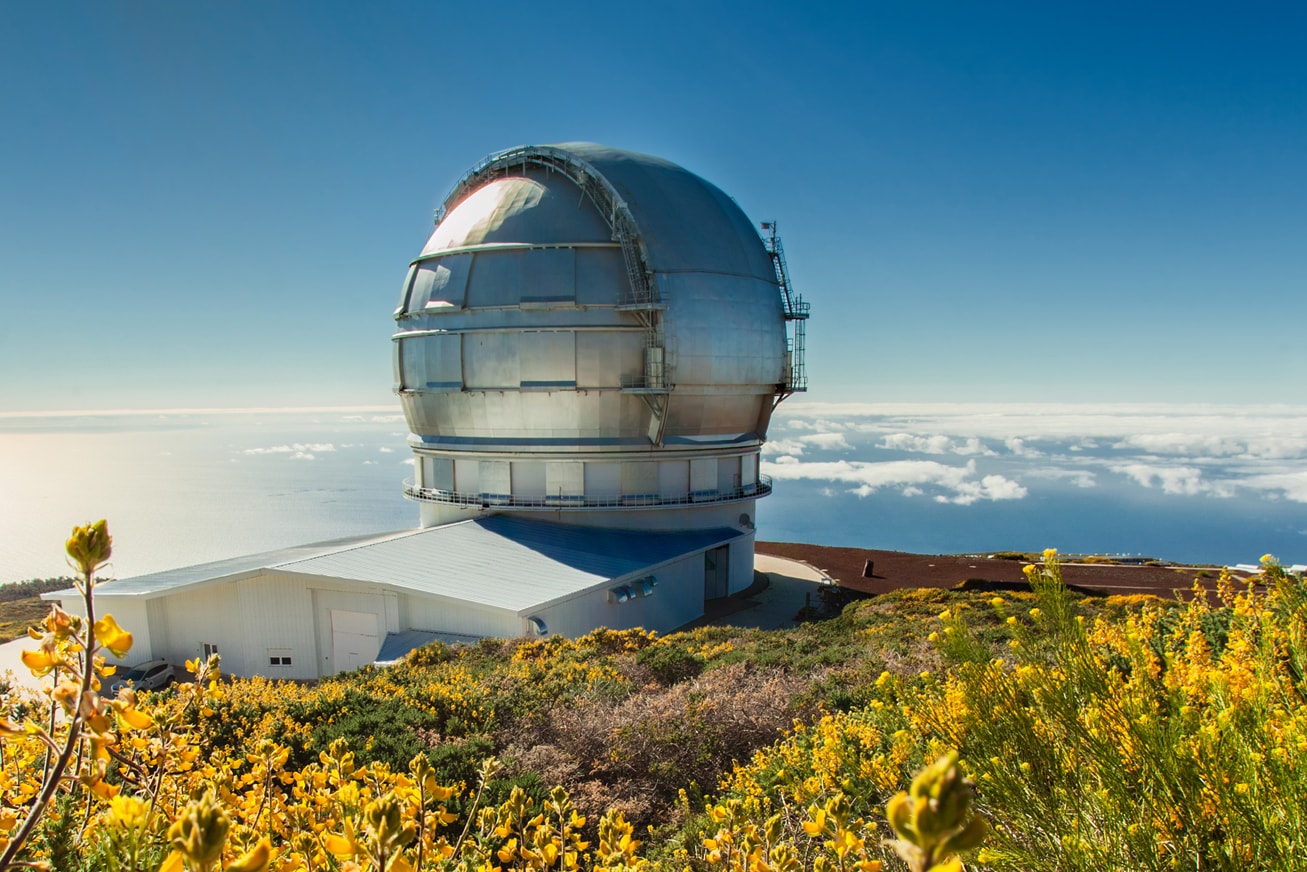 Network connects astronomical observatories of the Canary Islands to the world

Since ancient times mankind has been asking questions about the Universe… What are the solar system, asteroids, comets, and supernovae like? How are stars, planets and galaxies created? From what material is the Universe made? Discoveries tell us of supermassive and very bright stars, of dim stars and “brown dwarfs”, of “binary” stars that eat each other, of “black holes”, of “astronomical fossils”… A fantastic world, leaving much to explore.

The essential tool for studying the universe is the telescope, invented in 1609. Thanks to its invention, Galileo Galilei discovered four moons revolving around Jupiter in 1610. Over four centuries later, Observatories around the world possess giant telescopes whose construction demands huge investment, which is why most of them have been funded and are shared by many nations.

Among them are the Spanish Roque de los Muchachos (ORM) and Teide (OT) Observatories in the Canary Islands, enclaves with an excellent natural heritage thanks to the quality of the sky and their climate and geographical conditions, ideal for astrophysical research. In these observatories, the first black hole in the halo of our galaxy, the cosmos in the cosmic microwave background and, in the Pleiades, the first brown dwarf have been discovered, among other things.

The ORM and OT Observatories are owned and coordinated by the Institute of Astrophysics of the Canary Islands (IAC), whose infrastructures are used annually by more than 2,000 astronomers. This complex is open to the international astrophysics community through the participation of some 60 scientific institutions in 17 countries. Its international scope has grown exponentially since 2012 when, in a coordinated effort by the IAC, the Canary Islands government and RedIRIS, fibre optic networks were deployed allowing the terabytes of data generated by its activity to be transmitted to all countries involved.

Rafael Rebolo López, Director of the Astrophysics Insitute of the Canary Islands explains:

“Optical communication networks allow remote, secure storage and processing systems to be used, which are accessed with high-quality service and a stable communication time. The infrastructure provided by RedIRIS has added extraordinary value to Spanish astrophysics, making our astronomical observatories more attractive for capturing projects from around the world”

The Roque de los Muchachos Observatory (ORM) at 2,396 m above sea level on the island of La Palma brings together the greatest concentration of northern hemisphere telescopes on the planet, with installations from national and international consortiums. The GREAT CANARY TELESCOPE stands out among the Spanish ones (GREANTECAN-GTC).

The GTC, which began its scientific production in 2009, is considered one of the most advanced telescopes in the world and the largest in the optical-infrared range, with a segmented 10.4 meter diameter primary mirror. Its cutting-edge technology has helped answer many questions about the creation of the known universe, since, as if it were a journey through time, the GTC can “see” the most distant objects in our universe, whose light originated ago some 15,000 million years ago.

The ORM is involved in, among other things, two large-scale leading international astrophysics projects: the huge MAGIC telescopes which detect high-energy gamma rays using 270 individual mirrors that cover an area of 236m2; and the deployment of the 4-metre diameter Liverpool 2 robotic telescope which will be used by scientists all over the planet. This is why high-capacity communications networks, such as RedIRIS, are essential.

A robotic telescope allows a scientist, with full autonomy and from anywhere in the world, to monitor or receive the requested data merely by connecting their computer to the Internet. The connections provided by RedIRIS-NOVA (RedIRIS high-capacity communications network) allow this to happen with speed, quality and guaranteed security when sending data to and receiving data from the Canary Observatories.

The Teide Observatory (OT), located on the island of Tenerife at an altitude of 2,400 m., brings together the best solar telescopes of Europe. At the OT one can find the robotic telescopes STELLA I and II (Robotic Observatory), and BRADFORD, as well as those from the GLORIA project (GLObal Robotic-telescopes Intelligent Array). This project allows for the remote control of telescopes using the Internet on four continents, the creation of new astronomical experiments and the tracking of live events like the Northern Lights of Greenland.

The OT also archives images of the IAC-80 telescope, which can be viewed by any user around the world, especially since connectivity was improved in 2012. Also, the Observatory provides the installations for the Cherenkov Telescope Array (CTA), consisting of dozens of MAGIC-type telescopes covering 1km2. This deployment requires high-capacity communications networks such as RedIRIS-NOVA, which allow for the transfer of all the generated information to high-level processing and storage centres.

Join the conversation
Related articles
Astronomy
Chilean astronomical broker allows real-time studies of the dynamic universe
Astronomy
Understanding our planet through aurora
Astronomy
GÉANT and the SKA – an astronomical collaboration
Astronomy
What does Mars sound like? Turning the red planet’s data into music
Astronomy
Seeking powerful neutrinos off the coast of British Columbia
This website uses cookies to improve your experience navigating our site. By continuing to browse, you are agreeing to our use of cookies. To learn more about how we use cookies, please view our Privacy policy.
OK, I Understand