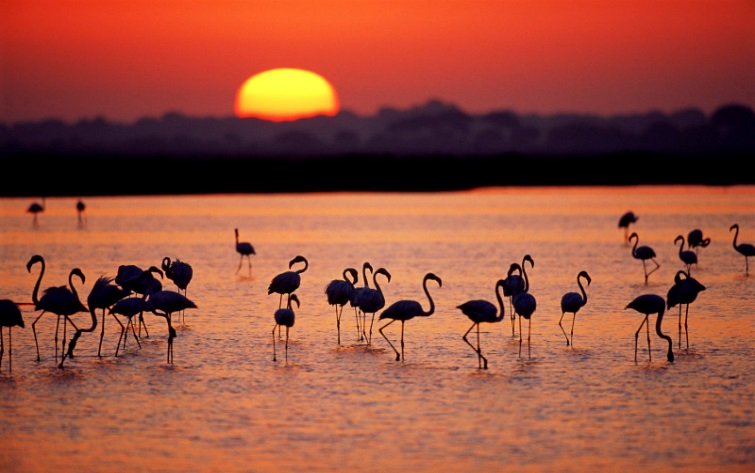 Doñana National Park in Andalusia, southern Spain, is a UNESCO World Heritage site and one of the world’s most fascinating nature reserves, a mosaic of ecosystems and home to unique and endangered species.

The Park is connected to LifeWatch, a joint European e-infrastructure for biodiversity and ecosystem research, which enables scientists to access a vast array of data from multiple resources in real time to learn about and help conserve and protect this environment.

Communication networks provided by RedIRIS are serving science for the conservation of biodiversity and to improve the environment.

Biodiversity, wildlife conservation, protected spaces, ecosystems, genetic resources and desertification are all scientific fields studied to learn about and preserve a balanced and sustainable environment for the Earth’s present and future generations.

Biodiversity is understood as the wide variety of living things (plants, animals, fungi and microorganisms) and their interaction with the ecosystems they inhabit.

These beings are subject to classification, study and monitoring; their natural patterns, their genetic variability, the ecosystems of which they are part and the landscapes or regions where they are located are all analysed.

Spain is privileged to possess a biodiversity unique to Europe in Doñana National Park, located in Andalusia between the provinces of Huelva and Seville in the Guadalquivir river delta. Of its 543 square kilometres, 135 square kilometres are protected.

Doñana is a mosaic of ecosystems made up of marshes, beaches, mobile and fixed dunes, scrubland, underbrush, hunting reserves and riverine habitats.

In particular, the marsh has an extraordinary importance as each year it is a place of passage, breeding and winter refuge for over 500,000 European and African water birds. You can find unique and endangered species living in the Park, such as the Iberian imperial eagle and the Iberian lynx.

Doñana is named after Doña Ana de Mendoza, the wife of the VII Duke of Medina-Sidonia, who retired to this paradise in the 16th century.

In 1964, the illustrious Spanish scientist José Antonio Valverde, together with the Higher Council for Scientific Research (CSIC) and with the financial support of the ecological organisation the World Wildlife Fund (WWF), created the Doñana Biological Reserve (RBD) in Almonte, Huelva. Since then, various international environmental protection institutions work in this area.

The Doñana Biological Station (EBD) is a research centre of the Higher Council for Scientific Research (CSIC), whose mission is to coordinate multidisciplinary research projects of the highest level in the Biological Reserve and provide logistical support to the scientific community.

The development of LifeWatch was funded by the Seventh Framework Programme of the European Union.

The management of LifeWatch is led by Spain (through the CSIC), the Netherlands and Italy.

Doñana, the leading centre in LifeWatch, entered a new technological phase in 2010 when RedIRIS, the Spanish academic and scientific network, installed a transmission network for images, voice and data in the Reserve, significantly improving its traditional connections. In that year alone it reached nearly 900 connected sensors.

Only four years later, in 2014,  Doñana entered a new research phase when the Ministry of Economy and Competitiveness financed the project “Adaptation and improvement of the internationalisation of the ICTS-RBD e-infrastructure for ESFRI Lifewatch” with four actions:

These activities will be underpinned by new fibre optic networks provided by RedIRIS-NOVA.

These networks will optimise the existing infrastructure for the storage, processing and retrieval of data; provide unique and open access to a lot of information distributed throughout interconnected databases; improve the use and monitoring of data; enrich the exchange of information among researchers and enable real-time monitoring of observations.

“The inclusion of the Doñana Biological Reserve facilities in the RedIRIS-NOVA fibre footprint is a new milestone for its connectivity on a global scale, within RedIRIS and in the world-wide research Intranet.

The almost unlimited band width provided by the new connection allows for the management and use of video images and all the sensors deployed in Doñana to be carried out under optimum conditions of quality, simultaneity and safety so they can be used by researchers in the most ambitious projects and to transfer knowledge to society”, says Víctor Castelo Gutiérrez, Communications and Security Director, Under-Secretary-General of Information Technology, Higher Council for Scientific Research (CSIC) [until December 2014].