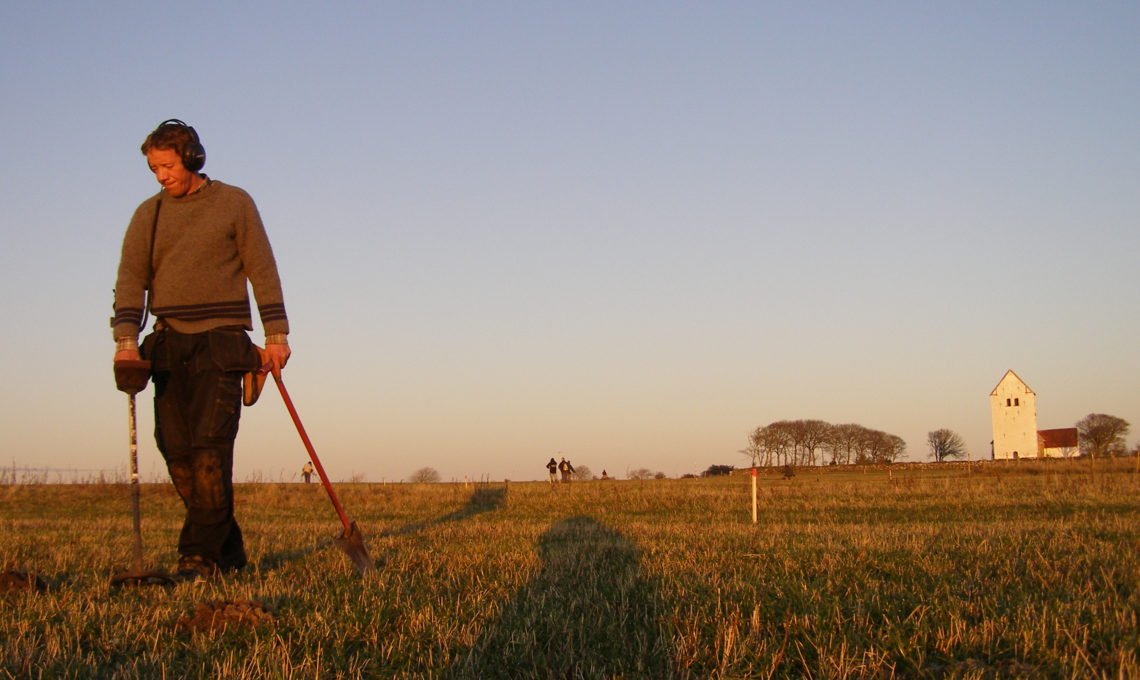 Integrating amateur metal detectorists into the network of archaeological knowledge

According to Danish Archaeologist Andres Dobat, in the past 30 years amateurs with metal detector have done wonders for archaeology:

– Like no other surveying method since the invention of the shovel, the metal detector has contributed to increasing enormously the amount of data and sites from metal-rich periods. Here in Denmark, most of the spectacular and ground-breaking discoveries of the past decades are owed to metal detectors in the hands of amateur archaeologists.

Dobat estimates, that there are between 1000 and 2000 active detectorists in Denmark, and he describes them as the most competent and skilled in the world. This is because of the unique legal situation and policy approach in Denmark, with the formal heritage sector having supported metal detecting right from the early detector days in the 80s. Unlike in many other countries, detectorists are not seen as mere “treasure-hunters”, and the heritage sector focuses on cooperation and inclusion instead of confrontation and criminalization.

The Internet of Cultural Things

Now Dobat and others are working on integrating the amateur detector finds into the digital network of archaeological knowledge, on a national, European and global scale, and Research & Education networks provide the connectivity to make it happen. The project is one of many in an on-going effort to create “The Internet of Cultural Things”, digitizing archaeology and cultural heritage, and making the physical artefacts in archives and collections digitally “visible”.

Danish metal detector finds are going to be integrated into the world’s largest digital network and research infrastructure in archaeology and cultural heritage, the ARIADNEplus project. ARIADNEplus, supported by the EU and launched officially in February 2019, is a cloud-based data infrastructure that offers Virtual Research Environments to carry out data-based archaeological research.

ARIADNEplus is the successor to the ARIADNE project that has integrated European archaeological data infrastructures, indexing about 2.000.000 datasets in its registry. The ARIADNEplus project will develop this infrastructure further by adding new services, and increasing the number of archaeological domains involved, all this to put in place the groundwork for cross-border research.

Based on a Linked Data approach to data discovery, the project will focus on services such as visualization, annotation, text mining and geo-temporal data management.

Andres Dobat and his colleagues from the Department of Archaeology at the University of Aarhus contribute to ARIADNEplus with one of the largest Citizen Science projects in archaeology, the DIME (DIgital MEtal detector finds) portal. DIME is an online tool for amateur metal detectorists to register their finds, in collaboration with professional archaeologists at Danish museums.

DIME, developed by Dobat and programmer Peter Jensen, expert in archaeological IT at the AU and Moesgård Museum unit of Archaeological IT, was launched 20th September 2018. It has quickly become a success: as of 1st April 2019, detectorists have already registered 20.000 finds. Previously the amateur detectorists published their finds on a Facebook page or on their own websites, e.g. detectingpeople.dk and others.

The advantage of the DIME portal is, that it establishes a standardised registration practise to integrate detector finds into official archaeological databases. This makes the finds accessible for researchers and potentially integratable with similar databases elsewhere, through the ARIADNE Portal.

– As an example, some of the most common metal detector finds from the Viking period are Arab coins. So, when an amateur metal detectorist registers his find, he obviously would like to know more about it and maybe compare it to similar finds in other countries.

– The way he did this in the past was by browsing through auction catalogues or asking peer members in various Facebook groups, etc. Now he can use the ARIADNE search engine to find more information, and examine similar coins found elsewhere.

In this way knowledge can flow both ways: By gaining access to amateur finds, archaeologists and cultural heritage professionals get better data for better research results. At the same time, the metal detector community gets access to international databases and research, to put their own finds into a larger perspective.

Digital infrastructures are crucial to this endeavour. They are an important tool in encouraging citizen science, advancing the democratisation of heritage management, and building a shared ownership of the past.