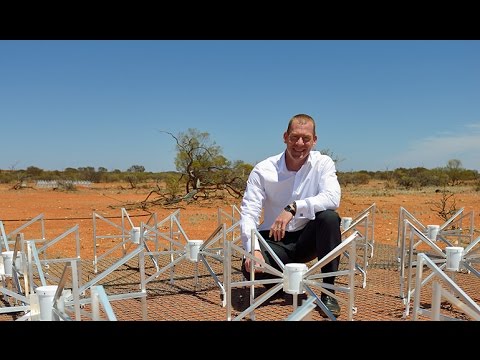 How this astronomer looks back in time

Steven Tingay is passionate about designing and building radio telescopes in outback Western Australia and using them to look at the first stars and galaxies. He is one of Australia’s leading astronomers, contributing to cutting edge global projects, such as the Square Kilometre Array and its precursors, the Murchison Widefield Array and the Australian SKA Parthfinder telescopes.

The Square Kilometre Array (SKA) project is an ambitious global scientific and engineering project to build the world’s largest and most sensitive radio telescope co-located in desert regions of southern Africa and Western Australia.

The SKA project is currently in the design and pre-construction phase. More than 250 scientists and engineers from 18 countries and nearly 100 institutions, universities and industry are involved in ‘work packages’ for different elements of the design. AARNet is working with CSIRO in Signal and Data Transport.

When the SKA is operational, hundreds of thousands of antennas will hugely increase the ability of astronomers to explore the far reaches of the universe and address mysteries around dark energy, gravity and life elsewhere.

To enable Australia’s participation in the SKA project, AARNet expanded its network across the vast expanse of the Nullabor, from Adelaide to Perth and on to the Murchison Radio Observatory (MRO), the future home of the SKA in remote outback Western Australia.

The newly deployed Australian Government-funded terrestrial network is capable of transmission speeds of up to 8 Terabits per second.

Connecting the SKA precursor telescopes at the MRO

To develop technologies for the SKA, two precursor telescopes, the ASKAP and the Murchison Widefield Array (MWA), have been built and are now operating at the MRO. The ASKAP is an innovative new radio telescope consisting of 36 identical 12-metre wide dish antennas.

The ASKAP uses revolutionary Phased Array Feed technology, developed in Australia by CSIRO, to survey the sky with a much wider field of view. The MWA is a collaboration between institutions in Australia, India, New Zealand and the United States.

A key aspect of the telescope is that all the individual dishes will be used together to form one huge ‘virtual telescope’, using interferometric techniques.

AARNet interconnects the telescopes at the MRO with the Pawsey supercomputing facilities, 800 kilometres away in Perth, for the computer processing required to extract useful information from the signals.

Fast reliable research network connectivity is critical for processing the deluge of data generated from the new radio telescopes.

Astronomers from around the world are dependent on connectivity over AARNet for accessing these new telescopes.