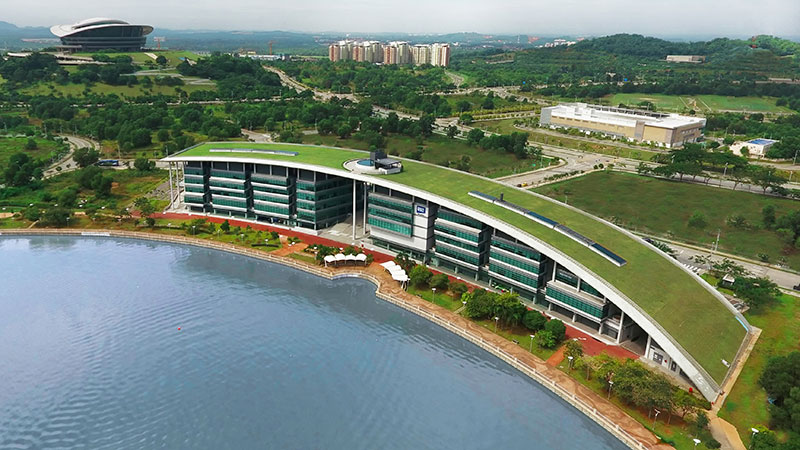 The challenge: connectivity to support a global vision

Describing itself as “Scotland’s international university”, Heriot-Watt University – which has 30,000 students in campuses across the UK, Dubai and Malaysia –  has an ambitious, global vision. The idea, says director of information services Mike Roch, is to develop students into “global graduates” – and to achieve this as a single entity, treating worldwide campuses as if they were buildings on one campus.

“We do not have branch campuses. We think of ourselves as a single, integrated global university.” Professor Richard Williams, Principal and Vice-Chancellor, Heriot-Watt University

So when it came to setting up a brand new campus in Putrajaya, Malaysia – Heriot-Watt’s fifth – Roch knew good connectivity would be paramount.

Prior experience taught him it would also be a challenge. So it initially proved: when the university set up a temporary campus in 2012, it had to rely on a 4G mobile connection from state-owned Telekom Malaysia, the only provider.  “It didn’t give us real-time connectivity, it didn’t give us file-sharing and it was barely adequate for the occasional Skype conference,” he says.

At the same time, Heriot-Watt was planning the connectivity for the full campus, set to open for 2013-14. “We felt at the time that we would like to have a high-resilience, high-performance MPLS circuit – but we couldn’t afford it. So we settled on a 100Mb business broadband circuit; we knew it wouldn’t be adequate, but it was all the budget could support.”

That made it difficult to collaborate and share files in the way Heriot-Watt needed. “We want straightforward, high-quality videoconferencing,” says Roch, “and access to cloud-based services such as our virtual learning environment (VLE) and Office 365 – and we want staff and students to be using these cloud-based resources on equal terms. So what we needed was a quality of connection to the Malaysia campus, equivalent to that which a UK university gets within the UK.”

Heriot-Watt’s solution came via Jisc. In 2013, Jisc got in touch with Heriot-Watt – along with other UK universities operating elsewhere in Malaysia – to say it was able to broker a better deal with Telekom Malaysia for connectivity, allowing Heriot-Watt Malaysia to get the same bandwidth at a lower price.

In addition, behind the scenes, Jisc was also establishing better connections to Malaysia via national research and education networks (NRENs) – which improved the quality of connectivity. “Rather than just being, as it were, a smallish business user in Malaysia taking our chances on Malaysia’s public internet connections, we were being routed through to GÉANT and the other international networks that Jisc support,” Roch explains.

Benefits to staff and students

Roch says the improved connectivity brought benefits to staff, to students and, by extension, to the university’s Malaysian reputation as it has grown to having about 1,350 students and 150 staff.

“The benefits are not primarily financial,” he says. “The challenge is to function as a single global entity. And we do, every day.” Students, he notes, take globally synchronised exams even though they’re in different time zones; staff can then hold videoconferences to discuss the results, and enter them into a single, Edinburgh-based student record.

“There are no servers running apps in Malaysia,” he points out. “They don’t have a mail system, library catalogue, student record system or finance system; they’re using these at from the cloud or based in Edinburgh, and they couldn’t if we didn’t have excellent connectivity.”

Even the process of setting up the campus itself, he says – including recruiting students – relied on real-time videoconferencing.  “This is what joins up this university. If we couldn’t meet each other online and speak to discuss things, then we’d be a collection of campuses, rather than a single, unified university.”

Reputation, he says, would have suffered if the connectivity was not in place. “We’re building our presence and our brand in the country – so having professional telecoms is a key part of that.”

Benefits to Heriot-Watt as an organisation

For Heriot-Watt, the most obvious benefit of Jisc’s involvement has been the financial saving: it is saving roughly 40% on what it would otherwise have paid Telekom Malaysia each year, Roch says, diverting money to other information services spending such as books.

But that’s by no means the only advantage. Instead the “big benefits”, says Roch, are in reduction of risk.

First, Heriot-Watt doesn’t need to be involved in network configuration or network performance management around the clock, because it’s part of the Jisc service. “Jisc engineers deal with Telekom Malaysia’s engineers and resolve problems without us ever getting involved,” he explains, adding: “I haven’t got the staff to monitor a point-to-point connection between Edinburgh and the Malaysia campus.”

Second, Heriot-Watt is also able to exploit the quality of connectivity to deliver cloud-based services such as the VLE and Office 365 – further de-risking the infrastructure.  “By having cloud-based services, we get 24/7, 365-days-a-year availability and systems support, and every campus is using these on exactly the same basis.”