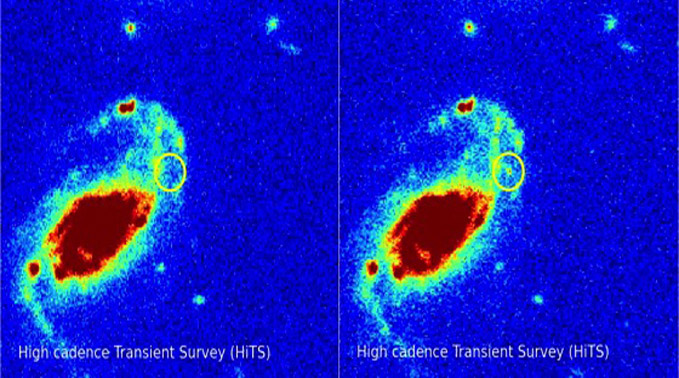 Recently, a group of scientists from the Center for Mathematical Modeling (CMM) of the Universidad de Chile were able see the explosion of 61 supernovas in real time, just hours after they appeared in space.

The visualization was made from the Cerro Tololo Inter-American Observatory (CTIO), which is part of the U.S. National Optical Astronomy Observatory, in northern Chile, and the data was sent through REUNA’s network to Santiago, for computational analysis.

The interdisciplinary team led by the astronomer Francisco Förster, conducted a similar experiment in 2014, finding 12 of these stars that glow in the sky for a limited time. This kind of study sheds light on phenomenon related to the creation of the Universe, the formation of celestial bodies and the characterization of different kinds of stars.

“You can look for supernovas to measure distances and determine how fast the galaxies are moving in Space or understand how the Universe is enriched with heavier atoms.

“For example, the Sun may have been the product of one of these explosions. Our goal is to understand the parent stars of supernovas. I mean, what kind of star produced the explosion”, explains Förster, who emphasizes that within a galaxy a supernova occurs approximately every hundred years, so the probability of finding one during a night of observation is very low. The trick is to watch millions of galaxies every night.

The monitoring was conducted from the Cerro Tololo Inter-American Observatory (CTIO), in the Region of Coquimbo, with a Dark Energy Camera (DECam) of 520 megapixels. “It’s the second best camera in the world for this type of data search in Space”, says astronomer.

From there, the images were sent almost 500 kilometers away through the high-speed network of REUNA, to the second most powerful supercomputer in Latin America, Leftraru, located in the National Laboratory for High Performance Computing (NLHPC) of CMM in Santiago.

In this machine, a software designed by Förster and his team submitted the data to an algorithm created in 2013 and refined in 2014, after the first explosion of the stars.

Improvements to this mathematical model allowed the number of detected supernovas to grow from 12 to 61 this year. “You have to teach the computer to recognize stars by showing it a million examples. This is called machine learning or computational learning,” explains Förster.

Basically, this program compares different pictures of space and examines where there are supernovas. When it finds one, it sends a global alert to the observatories, to point their telescopes at the new event.

Previously this work was done by humans who inspected photographic plates and, from the 90’s onwards, with images selected by digital detectors.

Now, this new mathematical model makes it possible to analyze nearly one hundred thousand images, equivalent to more than a billion pixels, captured during six nights of exploration, with millions of galaxies photographed in eight-hour shifts.