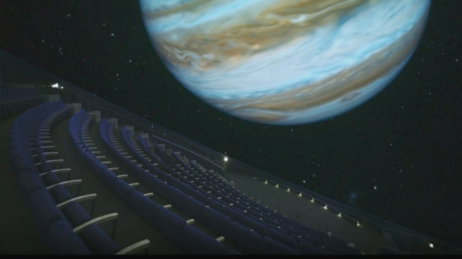 Bringing the Stars Within Our Reach: California Academy of Sciences Makes Data Come to Life

When news broke in March that stopping an asteroid from creating an extinction-level event by blowing it up might not work, the Morrison Planetarium at the California Academy of Sciences in San Francisco let visitors experience the discovery. Through a seamless mix of computer-generated and real images, visitors “flew” in virtual reality to an errant, potentially disastrous asteroid and watched as the space rock exploded into a million sparkly pieces before its gravitational pull caused it to quickly reform. The audience experienced up-to-the-minute scientific data, and journeyed to the very edge of human knowledge.

“The modern planetarium is an immersive theater,” said Ryan Wyatt, senior director of Morrison Planetarium and Science Visualization at the California Academy of Sciences. “We don’t just show you the night sky. We take you out into the universe.”

Today, highly networked planetariums are using new technologies and domecasting techniques to engage the public, to ignite curiosity, and to expand their audiences. At CENIC’s 2019 Conference, Wyatt and Mark SubbaRao, an astronomer and director of the Space Visualization Laboratory at the Adler Planetarium in Chicago, demonstrated how planetariums are engaging scientists in developing new domecast events that reveal the process of discovery.

Thanks to a digital revolution in planetarium technology, people can experience real images and three-dimensional animations of the universe based on the latest scientific discoveries. Every star or galaxy a viewer encounters in the Morrison Planetarium precisely mirrors its real-world counterpart, and when this virtual cosmos is projected onto Morrison’s 75-foot-diameter screen, the dome itself seems to disappear, resulting in a uniquely immersive experience.

Morrison and Adler Planetariums use Uniview visualization software and WorldWide Telescope (WWT), a powerful open-source tool that brings together images from the best ground- and space-based telescopes and creates a guided exploration of the universe. Originally developed by Microsoft Research, the software is now maintained by the American Astronomical Society. “WWT gives you a portal to all of the world’s astronomical information,” SubbaRao said. “When you’re operating a planetarium, you’re like a disc jockey, you’re spinning different images from different telescopes, all of which are hosted on cloud-based resources that you can access.”

“Domecasting” is the live broadcasting of a planetarium show to audiences at other planetariums around the world. Supported by CENIC’s high-bandwidth connectivity, Morrison Planetarium participates in the Adler Planetarium’s Kavli Lecture Series, a semiannual domecast that began in 2015.

Planetarium experts at Adler work with leading scientists to bring their raw data to life. The scientists themselves narrate domecasts and answer questions, challenging audiences to help solve cosmic mysteries. Audiences are led to the outskirts of the solar system, the beginning of time, or far-flung planets that might harbor life, and invited to ponder whether we are alone in the universe. A recent Adler domecast reached 25 planetariums, including Morrison and sites in Africa, South America, Asia, and Europe. Domecasts are also live-streamed on YouTube 360 for anyone to watch. Viewers across the globe have donned Google Cardboard headsets and tuned in with virtual reality.

In the past year, Morrison and Adler Planetariums have started to collaborate on “Universe Update,” showcasing the latest astronomy news. The planetariums use domecasting technology to allow audiences in Chicago and San Francisco to share the same virtual environment, while Wyatt and SubbaRao split hosting duties. “No one else in the planetarium community is doing this!” Wyatt said. “Mark will address one topic, then he’ll hand it off to me to describe another result.” Audiences can journey from Earth to the cosmic microwave background — residual light from the Big Bang and the oldest light in the universe — and back while hearing interesting science news along the way.

At CENIC’s conference, Wyatt flew attendees to Mars where the Curiosity rover was gathering samples with its robotic arm. Wyatt believes that the modern planetarium is a highly effective gateway to a deeper engagement with science, allowing audiences to not only fly through space, but also through the deep ocean or through cells in our bodies.

The California Academy of Sciences now has some of the highest levels of connectivity among scientific and cultural institutions in the nation. When the Academy joined CENIC’s California Research and Education Network (CalREN) in 2017, it gained 50 times greater broadband capacity than it had before. A 10 gigabit per second link is providing scientists and patrons with new opportunities to engage, create, share, and learn. In addition, the Academy is now part of a network that links 12,000 research and education sites within California to those around the globe. As a partner with these organizations, CENIC aims to continue expanding broader and better Internet access across California and beyond.

Watch the complete panel discussion, “Bringing the Stars Within Our Reach,” from CENIC’s 2019 Conference.