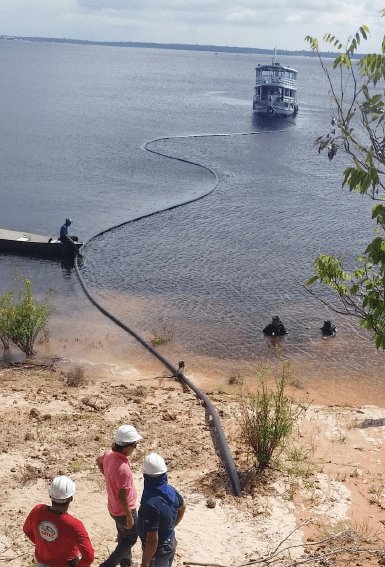 In the Amazon, the rivers are responsible for meeting the main needs of the population. The region is bathed by approximately 10 thousand km of watershed and the cities are located mostly on the fringes of these waterways, creating unique and challenging geographical conditions for the deployment of telecommunications infrastructure.

Such complexity makes the North the least connected region in Brazil. According to a survey done by the Brazilian Army, between 2005 and 2014 the Western Amazon made little progress in terms of connectivity, forming a barrier named the “Digital Tordesillas”.

The communication services are provided mostly via satellite. The exceptions are the capital Manaus and the locations in the Manaus – Porto Velho and Manaus  – Boa Vista routes, currently served by optical fiber.

In the near future, the municipalities in the Manaus – Coari route and the Calha Norte route, between the cities of Macapá and Manaus, will be served via terrestrial optical fiber networks. In the rest of the countryside of Amazonas, access to the network is poor, and having more speed means higher costs.

However, by the end of 2015, the population from 52 municipalities in Amazonas will enjoy connectivity at multiple gigabits through the Connected Amazon Program (Programa Amazônia Conectada), which aims to build an optical fiber infrastructure with an approximate length of 8000 km, through the riverbeds of the Amazonian rivers.

The program is led by the Army and has RNP, Brazil’s national research and education network, as one of its main partners, as well as the Amazonas Data Processing Company (Prodam), the Amazonas State Department of Science, Technology and Innovation and the Amazon Environmental Research Institute (Ipaam).

The expectation is for the legacy of Connected Amazon to make a series of data network services feasible for the population of the countryside of the state, to support regional development.

Eduardo Grizendi, RNP’s Engineering and Operations director, believes that this new network infrastructure will serve, at multiple gigabits, about 160 teaching and research institutions not only from the state of Amazonas, but from the entire region.

“RNP has Points of Presence at the capital of every state comprising the Amazonian region, in addition to optical fiber metropolitan networks in Amazonas, Pará and Amapá. That is, the program has a great impact in generating knowledge and qualified human resources in the region, promoting its scientific, economic and social development,” the director states.

By the end of 2017, the forecast is to construct three information highways through the beds of rivers Juruá, Purus and Madeira, in addition to the channels of Rio Negro and Solimões rivers.

In a later moment, the idea is to extend this connectivity to the neighboring countries, creating an international connective alternative.

According to the chief of the Integrated Center for Telematics of the Brazilian Army, general Decílio Sales, the challenge will be managing this infrastructure as a service after the deployment.